Auburn High Defeats Rehobeth and Enterprise in Round Robin Tournament

Enterprise and Rehobeth High School made a trip to Auburn High School for a round robin style tournament with the Tigers on Saturday. Because of the game scheduled against Oxford last Wednesday was canceled due to rain, the first game against Rehobeth became the home opener for the Tigers.

Rehobeth got off to an early 1-0 lead in the top of the first, but the Tigers tied it back up in the bottom of the third on a ground-out by Clay Golson that scored Ryan Lambert. Rehobeth responded in the top of the fourth with a home run to center by Cade VanSlyke, giving them a 2-1 advantage. In the bottom half of the fourth, an error at third by VanSlyke allowed Trey Woodham to tie the game at 2. Auburn scored again in the fifth on a two-run homer by junior outfielder Garrett Morris, giving the tigers a 4-2 lead. Auburn added three more in the sixth inning on an RBI double by senior shortstop Rowdy Jordan that scored two, followed by an RBI single by Garrett Morris.

Rowdy Jordan finished three for three in the game with two runs scored and two RBI, while Garrett Morris went two for three and three RBI. Taylor Adcock started the game for the tigers and pitched 2.0 innings and gave up an unearned run. Ryan Lambert, who was in the lineup as a DH, earned the win for his 1.2 scoreless innings out of the bullpen, including a couple of strikeouts.

In the Tigers’ second game against Enterprise, Auburn’s offense could not be stopped.  They won the game 17-5 in just six innings. Auburn took advantage of two errors by Enterprise in the bottom of the first and scored three runs to take an early 3-0 lead. In the second inning, Rowdy Jordan hit a three run homer to left to take a 7-0 lead. Later in the inning, Brooks Fuller hit a two run homer to left to extend the lead to 9-0. Auburn High added four more in the third after an RBI double by junior Carter Hunt scored two, a Brooks Fuller ground out scored one, and an RBI single by Wes Starr scored another run. Auburn held a 13-0 lead after just three innings. In the bottom of the sixth, Ted Benda hit a grand slam to center, which made the game 17-5 and ended the game due to the 10 run mercy rule.

The next game for the tigers will be Wednesday (March 1) at McGill-Toolen. The next home game will be against rival Opelika on March 8th at 7:00. That game will be broadcast on ESPN 106.7, and can be streamed online at espnau.com, or on the ESPN 106.7 app.

Auburn started their three game weekend set against Holy Cross strong on Friday, taking game one by a 7-0 final. Junior pitcher Keegan Thompson was completely dominant on the mound for the tigers, as he pitched 8 innings of one hit ball, including six strikeouts. Thompson picked up the win, making him 2-0 through two starts, without allowing a hit in either start.

The tigers’ wasted no time on offence, as they put up four runs in the top of the first to take an early 4-0 lead. Daniel Robert got the scoring started with an RBI single, then Josh Anthony followed with a sacrifice fly. Dylan Ingram scored Robert on an RBI double, then Bo Decker continued his great offensive play with an RBI single. Auburn then added another run in the sixth on a wild pitch to make it a 5-0 game. The tigers then added two more runs in the bottom of the eighth on a Jonah Todd triple. Todd then scored one batter on a Bo Decker sacrifice fly.

Bo Decker put up good offencive numbers for the second game in a row, as he had three hits and a couple of RBIs. Jonah Todd also had a nice day at the plate, as he recoreded one hit and one RBI and plated two.

The win pushes Auburn to an impressive 5-1 record on the young season. The next game for the tigers will be game two of the three game set with Holy Cross on Saturday (February 25) at noon CT. The final game of the set will be Sunday (February 26) at noon CT. 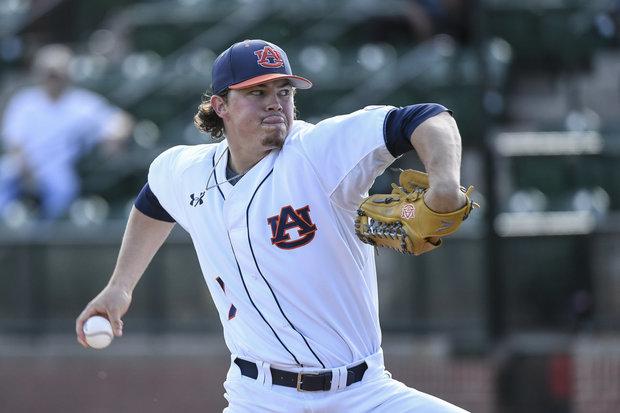 By Riley Hubbard | Uncategorized | No Comments
0

In their fourth game of the 2017 season, the Auburn University baseball team appeared to be headed towards an ugly blowout against Florida A&M on Wednesday. The rattlers scored 6 runs off senior Gabe Klobosits and freshman Elliot Anderson through just 2 innings to open the game. After A&M scored another run in the top of the fifth, Auburn’s offence came to life in the bottom half as they plated 6 runs thanks to two sac flies, two RBI singles by Josh Anthony and Bo Decker, a hit by pitch, and an error. After the six run fifth, Auburn had cut the deficit to 7-6 .

The rattles scored another in the top of the sixth, then senior Danial Robert responded in the bottom half with a two-run homer to tie the game 8-8. Auburn then took the lead in the bottom of the eighth on a Jonah Todd RBI single. The tigers added some insurance runs thanks to a balk that drove in Josh Anthony, then Bo Decker added a couple more RBIs on a single making the score 12-8, and the tigers went on to win by that score. Montgomery native Cole Lipscomb got credit for the win for his 1.1 hitless innings, including a strikeout.

The final line showed Auburn scoring 12 runs on 15 hits and an error. Florida A&M finished with 8 runs on 13 hits and 2 errors committed. Auburn is now 4-1 on the young season, and their next game will be the the first of a two game set with Holy Cross this Friday (February 24) at 2:00 PM at Plainsman Park.

By Zac Blackerby | Uncategorized | No Comments

Auburn’s 2017 recruiting class ranked ninth nationally, the fifth year in a row the Tigers finished in the top 10 overall.

The staff did a nice job of filling needs across the board. But what was a need in 2017 won’t necessarily be a need in the 2018 class and vice versa. Here’s a look at the biggest recruiting priorities for the ’18 class for Auburn and what positions the Tigers should target this year.

1. Wide receiver: Wide receiver should be a position of focus for the 2018 class. Even though Kyle Davis, Nate Craig-Meyers and Eli Stove all have at least two more years on the Tigers’ roster, Auburn needs to be ready just in case they all leave at the same time. With Auburn only signing one receiver in 2017, Noah Igbinoghene, it clearly needs to focus on depth for the future. With a tweaked offensive scheme coming for the Tigers with the arrival of Chip Lindsey, receivers will be important for Auburn.

2. Defensive tackle: The Tigers did not get a big name in the defensive line in this class but did sign two three-star prospects. D-line depth should be fine for this year, but after Derrick Brown leaves for the NFL in two seasons, Auburn does not appear to have a successor on campus. Rumors are swirling that Auburn will go after a junior college defensive tackle in the ’18 class and also will look at moving Byron Cowart inside in pass-rush situations.

3. Cornerback: Carlton Davis is a year away from being a high pick in the NFL draft. And when looking at the depth chart after Davis, there’s a big drop-off in talent. Auburn needs to find another future star at corner. Not that stars and ratings mean everything, but Auburn has brought in multiple three stars. If one hits the field and performs and develops better than expected, Auburn could be in a better situation. Still, depth will be a question going into National Signing Day in 2018.

This was also posted on Gridiron Now.

Auburn High Basketball Advances to the 7A Final Four in Birmingham

After knocking off number one seed Robert E. Lee in the first round, the Auburn High boys basketball team was set to take on area rival Central-Phenix City in round two of the 7A regional championship. Auburn High won the game on a last second tip in by senior Garrison Brooks, leading to a 50-49 Auburn victory. Brooks ended the day with 15 points, nine rebounds, and three blocks and was named the regional tournament MVP. Christian Brandt and Preston Cook also had solid games for the Tigers, as they both recorded 12 points in the victory. Auburn has not made it to the state semifinals since 2005, when they took home the state championship.

The AHS girls team also played in round two of the regional tournament against Central-Phenix City, but fell short by a 39-34 final. Senior Nautika Philpot still had a nice game, as she put up 13 points, while Alexis Tate recorded 5 points, 6 steals, and 11 rebounds.

The Auburn boys team will now go on to face Vestavia Hills next Thursday (March 4). Scott Bagwell will bring you the broadcast at 10:30 AM on ESPN 106.7, which can be streamed online at espnau.com or on the ESPN 106.7 app. Don’t forget that Scott Bagwell will also have the call for the Auburn High baseball home opener against Oxford tomorrow. That game can be heard on our sister station, 96.3 WLEE. The game can also be streamed online at 963wlee.com.

The Auburn High Baseball team spent their President’s Day in Prattville, as they opened up the season with a double header against the Lions. In game one, the Tigers shut out Prattville 13-0. Senior catcher Rollins Cleveland racked up 3 RBI’s on 2 hits. Junior Brooks Fuller and senior Trey Woodham both recorded 2 RBI’s as well. Junior Drew Jennings got credit for the win on 3.0 innings of 1 hit ball and 4 strikeouts.

In the second game of the double header, Auburn’s offence kept rolling as they won 9-2. In the victory, Trey Woodham put on a show with 2 home runs and 3 RBI’s. Clay Golson recorded a couple of RBI’s on a double and a sacrifice fly. Brooks Fuller got credit for the win as he just gave up 1 hit and struck out 6 in 3.0 innings of work. In game 2, the Tigers had struck out a total of 9 Prattville Lions.

The home opener is next up for AHS, which was originally scheduled for Tuesday, but instead will be played on Wednesday at 4:30 CT. Due to a programming conflict with The Drive with Bill Cameron, Scott Bagwell will have the call on our sister station, 96.3 WLEE. The game can also be streamed on 963wlee.com.

Bill got a chance to catch up with the head coach of the Auburn High golf team, Billy Ramsey on Friday. Coach told us some details about their upcoming season and why he believes this team can take home the 7A golf title this season.

By Riley Hubbard | Uncategorized | No Comments
Next Entries »